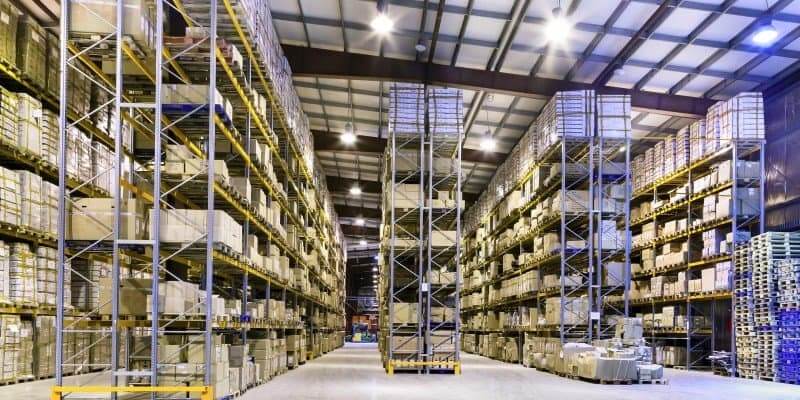 With the boom of e-commerce, especially the online-to-offline (O2O) shopping, major players in e-commerce and logistics (e.g., Amazon, Alibaba, JD, etc.) have been investing significantly in building automated warehouses, to improve the efficiency, minimise human errors, and reduce the cost.

In an automated warehouse, robots (e.g., automated guided vehicles or AGVs) move the materials or even the shelves to designated locations under the control of the back-end management system. To keep the system operating smoothly and effectively, a high-performance and stable wireless network which provides the communication channel between the robots and back-end control system is crucial. WiFi, due to its technical maturity, unlicensed spectrum, and abundant terminals/cards available, has become the most common choice of the wireless network for automated warehouses.

On the other hand, automated warehouses typically have complex and changing internal layout, with many robots working simultaneously, which pose some challenging requirements on the WiFi network, among which below are the most important ones.

Altai Technologies is the world-leading large-coverage outdoor WiFi solution provider. Via Powertec, their distributor in Australia and New Zealand, they apply their Super WiFi technology and products to automated warehouses, and provide an exceptional solution to warehouse customers.

Altai Super WiFi APs have super large coverage. In line-of-sight (LOS) condition, A8-Ein(ac) base station can provide coverage up to 1.7km to normal clients (laptops, smartphones, etc.), and A3-Ei AP can also cover up to 1km. Thanks to such super coverage capability, by installing a single such AP at a high place at one of the corners of the warehouse, blanket WiFi coverage can be provided in the warehouse without any blind spot. See below figure for the illustration. 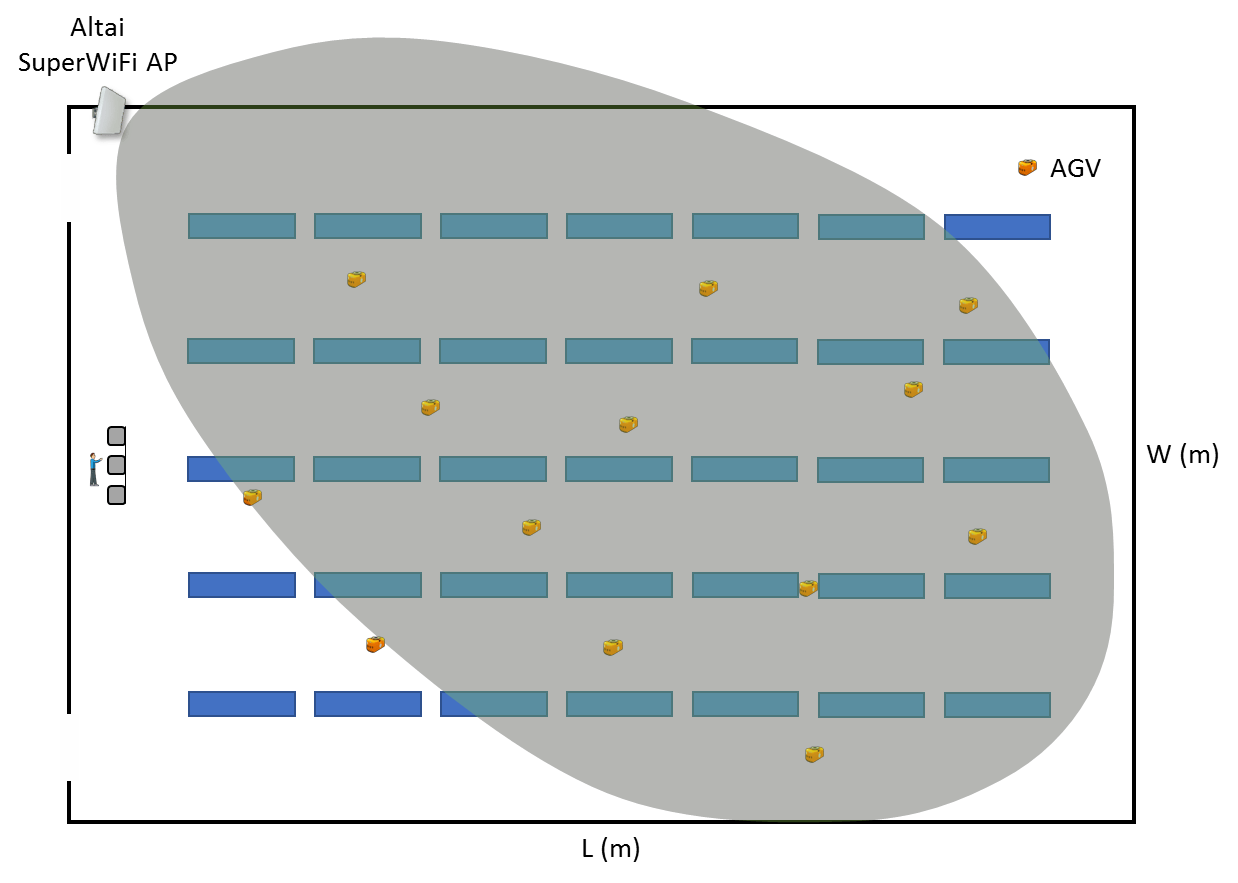 One of the major reasons that Altai Super WiFi APs have such great coverage capability is the high-gain wide-beam antenna. The built-in antenna array of A8-Ein(ac) has a gain of 19dBi and 3dB horizontal beam width of 80°. A3-Ei also has an antenna gain up to 13dBi and beam width up to 80°. Moreover, their mounting kits support a maximum down-tilt angle of 30°, which enables them to have flexible down-tilt angle during installation according to the installation height and the size of the warehouse, so as to achieve the best coverage.

Automated Warehouses have heavy workload, which poses high requirement on the stability of the system. As the communication platform for AGVs and the backend control system, the WiFi network must be able to provide quality service persistently. Therefore, coverage (or AP) redundancy has become one of the important requirements for the WiFi network of an automated warehouse. Since Altai Super WiFi APs have super large coverage, the redundancy solution is direct and simple. As illustrated in the below figure, we just need to install another AP at the diagonal location of the initial AP. Both APs could provide full coverage of the warehouse individually. When one of them fails, all the AGVs could be served by the other one. 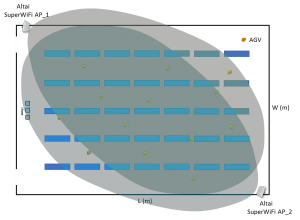 When a warehouse is covered by multiple APs, AGVs may have to roam among APs, which can potentially cause AGV pauses and service interruptions if the handover is not done properly and timely. Thanks to the super large coverage of the APs, Altai Super WiFi solution minimises the number of APs required and hence the chances for AGV roaming, and its adverse impact on the services.

AGVs typically use mPCIe or USB WiFi cards, of which the driver may not implement a fast-roaming mechanism. Therefore, the roaming performance may still be suboptimal even with AP’s support for fast roaming. Altai provides industrial-grade CPEs (C1ni/C1ani) which support tuning a variety of roaming parameters (e.g., scanning interval, RSSI threshold, etc.) according to the actual environment to achieve the best roaming performance. When working with Altai Super WiFi APs, C1ni/C1ani can achieve a roaming latency < 100ms even under WPA2-PSK authentication. Therefore, if an AGV can be equipped with an Altai industrial CPE, its roaming performance will be significantly improved. Altai C1ni/C1ani industrial CPEs have a dimension of 197mm x 96mm x 29mm, and use Ethernet as the wired network interface. Medium to large-size AGVs have a good chance to be able to install them.

Currently a great portion of the AGVs in use only support 2.4GHz WiFi. But because of the limited number of available channels and high interference in the 2.4GHz band, more and more AGVs start to support 5GHz WiFi. A future- proof WiFi network for an automated warehouse should support both 2.4GHz and 5GHz simultaneously. Altai Super WiFi APs support dual-band dual- concurrent (DBDC) operation.

There are 13 channels in the 2.4GHz band (without considering the channel 14 which is only available in Japan). The channel spacing is 5MHz while the channel width is 20MHz (or more accurately 22MHz). Therefore, there are only 3 non-overlapping channels at the same time, e.g., channel 1/6/11 which are commonly used in WiFi network channel planning (other combinations like 2/7/12 are seldom used in planning because they overlap/interfere with the most commonly used 1/6/11).

802.11n supports two channel modes: HT20 uses only one channel, while HT40 implements channel bonding so that two adjacent channels (e.g. channel 1 and 5) can be used together to have a 40MHz channel width and doubled throughput. Due to the limited number of available channels, it is recommended to use HT20 mode only in the 2.4GHz band, so that we still have channel 1/6/11 for channel assignment of the whole network.

Obviously, in 2.4GHz band fewer APs would mean easier channel assignment and less inter-AP interference. Altai Super WiFi solution has an advantage in this regard.

The 5GHz band has more than 600MHz spectrum width, and much more channels than 2.4GHz band (the actual number of available channels depends on the local regulations). Hence the channel planning is relatively easier. On the other hand, the 802.11ac standard operating in 5GHz band not only supports HT20 and HT40 channel modes, but also supports HT80. When the number of AGVs is not high, HT20 can typically fulfill the bandwidth/capacity requirements; when the number of AGVs is high, HT40 can be considered; HT80 is in general unnecessary.

Not only do Altai Super WiFi APs have super large coverage, but they also have high capacity (concurrent clients). For warehouse AGV type of applications, the recommended max number of AGVs connected to a single Super WiFi AP is shown in the below table, i.e., 80 AGVs per radio (2.4GHz and 5GHz), and when in DBDC mode, 160 AGVs per AP.

To further enhance the security by preventing non-working WiFi terminals (e.g., personal smartphones of the workers in the warehouse) from connecting to the SSID, MAC access control list (ACL) function can be enabled with black and white lists properly set. 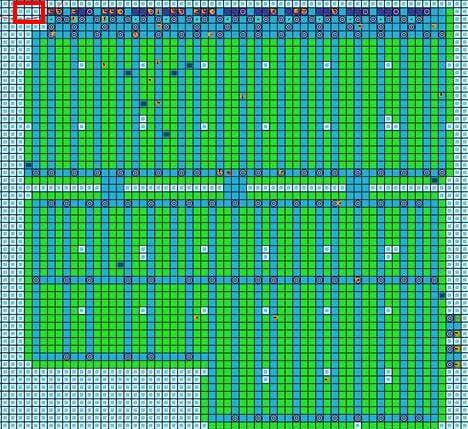 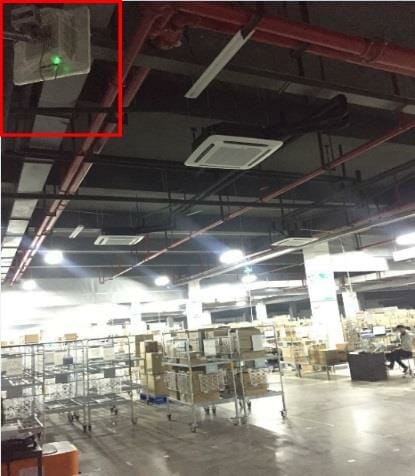 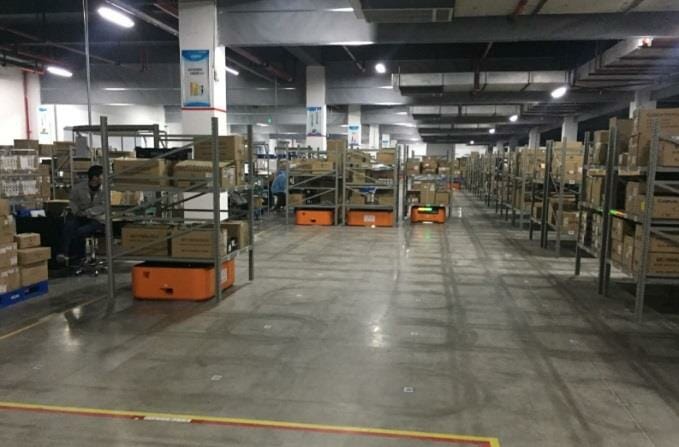